I bought a book the other day. One of those impulsive, compulsive purchases that leave me feeling like I’ve done something good in the world. Of course the feeling is altogether misguided. Later, while reading the paltry balance on my bank statement I  grudgingly admitted that I hadn’t done the world a favour at all. I continue to contribute substantially  to the culling of  unsuspecting forests the world over and in similar murderous vein my bank balance is rapidly dwindling. And  it’s  my bank balance that does not have a single dedicated organisation campaigning for it’s preservation.   The usual protocol to follow after raiding a bookstore is to scratch my name onto the inner cover of the book, marking my territory, animal planet style and then stack up the book on my leaning tower of similarly unread foibles. I then customarily look at my shelves and solemnly swear never to commit deforestation again. But it’s often not all disastrous, especially when I do put on a scholarly veneer, remove said book from the precariously petering tower and open it to a gem like this:

Not to let a word get in the way of a sentence,

Not to let a sentence get in the way of its intention,

But to send your mind out to meet the intention

-as you would a guest-

I also read a short, sharp little book called Life on the Refrigerator yesterday. It is a charming little book, consisting entirely of notes left on the refrigerator door by a mother and  daughter. The story itself left me in tears and  while it took me all of an hour and a half to complete, it left me questioning the nature of our interactions with friends and family. Anybody who’s been out with me between 22h00 and midnight knows that my parents and I certainly don’t have communication gaps.  Communication gluts would me more accurate. The book though led me  to question what exactly I communicate with others. In continually claiming to be busy, sending off that text and putting off face-to-face contact, rushing off to do something else, somewhere else, it’s not time I’ve come to be short of, it’s the many people I’ve had to sacrifice in the name of being too busy to visit their new babies or offer my condolences at the loss of a parent.  And yet my Facebook friend list counts some 300 people as friends.  We’re all  becoming strangely more entrenched into little worlds of our own despite all this interconnectedness. And in rushing in and out, perfecting this facade of being too busy, how much are we leaving unsaid?

Ekman had tracked down a hundred thousand feet of film that had been shot by the virologist Carleton Gajdusekin in the remote jungles of Papua New Guinea. Some of the footage was of the tribe called the South Fore, who were a peaceful and friendly people. The rest was of the Kukukuku, a hostile and murderous tribe…

This excerpt reeks of the sort of old fashioned cultural imperialism popularised by the writings of Livingstone and Stanley and reworked today by the likes of Asne Seierstad. ‘Peaceful and friendly and hostile and murderous’- Are these people being described here or a whole other species of beings? When we look at people different to us must the first thing to be communicated be their threat or lack thereof to us?

Gladwell here is illustrating the facial expression reading prowess of a psychology researcher but in doing so he merely regurgitates someone else’s othering of African people. I realise that these people are not his subject, they are merely accessory to a broader thesis. So too, my own point, if I succeed at all in making it here, is not to reflect on the accuracy of this description but rather to question its framing.I was fascinated by Blink. I am now enthralled by the idea of training myself to make better split-second judgments. Gladwell is that rare writer whose immense talent is commensurate with his staggering populatiy. I’m not consistently snobbish enough to turn my nose up at bestsellers. The gentry then as now must read to understand the ire of the multitude said Fay Weldon. My place is with the multitudes and so long as I am not expected to read of an agsty teenager’s necrophilic tendencies to prove it I will gladly read Gladwell. He certainly is an astute contributor to the contemporary textuality.

This excerpt is a timely reminder of cultural hegemony that continues to dog our perspective of the world. For too long we have sought to reaffirm our wholesomeness at the expense of a people seen and not heard.

I wonder if we were to subject the contemporary to such an analysis on the basis of some do-gooder’s roll of film, how would we describe the Barmy Army, Egyptian police, New Year’s eve revellers in Hillbrow, Saudis in Tahliya street, the American armed forces? 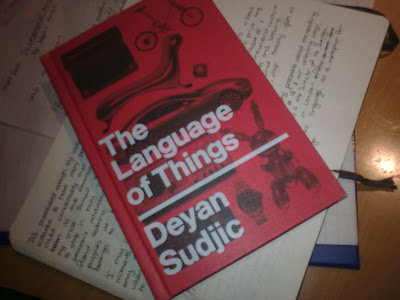 The Language of Things is a remarkable book, well worth its rather hefty price tag. It begins as a critique of contemporary consumerist culture with witty one-liners and knowing insights into what exactly makes us go shop-shop. Many of the points Sudjic punches out within the first few pages echo some of my deepest reservations against my own spendthrift, accumulating ways.

Never have more of us had more possessions than we do now, even as we make less and less use of them. The homes in which spend so little time are filled with things….They are our toys: consolations for the unremitting pressures of acquiring the means to buy them and which infantilize us in our pursuit of them.

I was compelled to sit up and read closely after that opening paragraph, so much so that I bought the book, adding to the stack of unread books on my shelf, but determined to own it, an ironic exemplification of Sudjic’s opening salvo. He goes on to add, ‘Like geese force fed grain until their livers explode, to make foie gras , we are a generation born to consume.’ It’s been many years since I’ve recovered (of course not entirely) from my obsession with shoes. Long before I knew the sexual connotations of a slinky pair of stilettos I collected them with gusto, happy for the happiness it brought me in its acquisition. But it was a brief interlude from my real passion, books. As much as I buy them I am suffocated by the guilt of consuming too much, angry with myself for being so easily seduced by binded words and remorseful at the interview that inevitably follows with my parents, ‘Yes Mum, I know you bought me a whole lot of books in India. No, I do like them. It’s just that these…I know there are more important things….’ Sudjic has become somewhat biblical with words well adjusted to my predicament:

In my own life, I have to acknowledge that I have been fascinated by the glossy sheen of consumption while at the same time nauseous with self disgust at the volume of what we all consume, and the shallow but sharp emotional tug that the manufacture of want exerts on us.

Unlike my fetish for shoes, my booklust is redeemable in its perceived nobility. But at a more basic level it functions exactly like the Imelda Marcos impersonation. It is driven by a want of objects. Our individual worlds are not constituted of beliefs, ideals and values; they are only the mortar to the bricks that our possessions. The parable of the person with the least possessions having the least to answer for in the hereafter peals an ominous sounding alarm bell. Our drive to pad our lives with inane things has become an intricately drawn out process not untouched by class and constantly philosophical about exactly what luxury is.

Sudjic is after all the not a Marxist social critic but rather the director of the Design Museum in London. He takes the view of design as a kind of language:

…design has become the language with which to shape those objects and to tailor the messages that they carry. The role of the most sophisticated designers today is as much to be storytellers, to make design that speaks in such a way as to convey these messages, as it is to resolve formal and functional problems. They manipulate this language more or less skilfully, or engagingly, to convey a kind of story…. 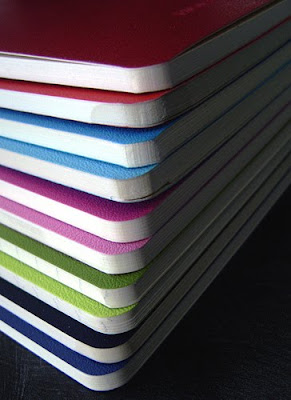 Any kind of object can offer a soothing quality…. The Moleskin notebooks, with their characteristic hardcovers, rounded corners, slender proportions and built in elastic band, are to this decade what the Filofax was to the 1980s. Their appeal is not the neurotic organising impulse of the Filofax, but in the faint memory that the notebook contains of a simpler past- not our own necessarily, but a more generic idea of what life was once like even if it never was. On the band that goes round them below the shrinkwrap, they also describe themselves as the ‘legendary notebook of Van Gogh and Matisse, Hemingway and Chatwin‘, and so seem to suggest talent by association.

Deyan Sudjic, The Language of Things