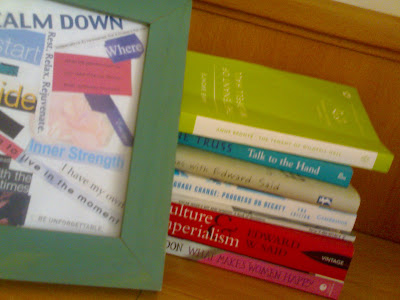 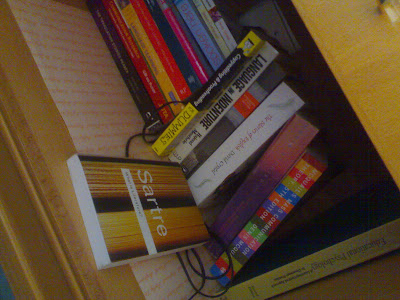 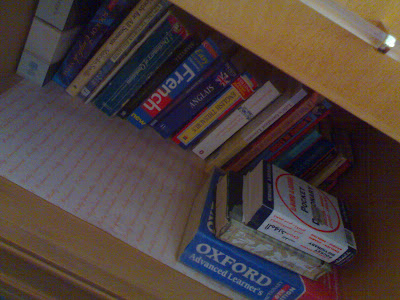 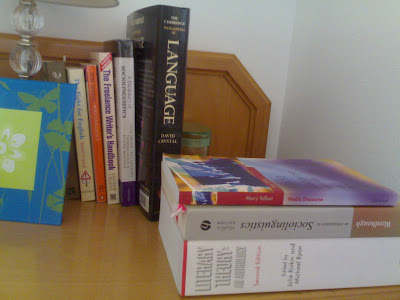 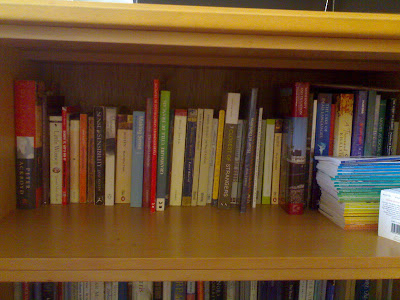 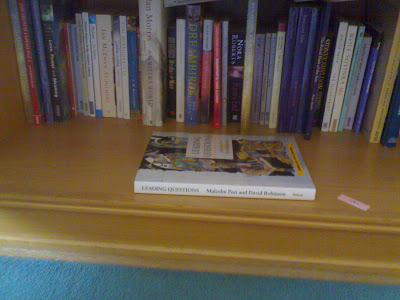 ‘When we are collecting books we are collecting happiness’, I’ve used the quote before but it’s so apt to my mood. Our neighbor’s are temporarily relocating to the great Doo-baa-yeee and although they are keeping their home in this corner of the world, they’ve decided their imminent departure to be a great reason to declutter. So Aunty Sal sends over a box of books and asks ever so sweetly if we’d oblige her by adopting a few. Suffice to say Eid came around twice this week… I’ve adopted:
1. Lord of the flies, William Golding
2. A Dry White Season, Andre Brink
3. The Handmaid’s Tale, Margret Atwood
4. To Kill a Mockingbird, Harper Lee
5. John Keats Selected Poems
6. From Jo’burg to Jozi Heidi Holland Adam Roberts (eds)
7. Song of Solomon, Toni Morrison
‘Love sought is good, but given unsought is better.’ William Shakespeare
Now where to put them?

I don’t read mcuh fiction anymore either, and don’t really buy much fiction except to beef up my classics collection.

globalcitizen, love keats too, well his poetry at least :p haven’t seen the movie but will certainly look it up.

>I LOVE John Keats. Lord of the Flies is a great novel too. Did you see the movie? It’s good as well.

>I saw a girl sitting with Zubair Habib, and something in my head said that it was you.
I often have these odd moments of ‘connection’.
I wasn’t certain though, and I didn’t get a chance to make contact, so I thought I’d just ask you:)

I used to read more when I was younger. I dont read fiction anymore – unless it has to do with young wizzards and whatnot. Last piece of fiction I started reading was God of Small things.

>saaleha, I’m curious- what made you think I was there? 🙂 ah so you probably sat close to us too.

That definition of where poetry comes from is just so profound and I loved Gabeba’s, Old Photographs.

Bianca and Comrade Fatso too were awesome.

>I sat on the stairs.
When she spoke about that undefined ‘space’ from where poetry comes from, that really resonated with me.
I thoroughly enjoyed the evening. All of them have such a unique take on poetry.

>saaleha, the binne-buite thing was special I was so thrilled to listen to Antjie and loved her ‘ I don’t have a space in English answer’

gutted we missed each other, where were you sitting?

8bitsofcoffee, here’s to neigbors and friends who bring joy with books.

hehe happens to me all the time.

>Feaking hell, I clicked too many time on the “publish your comment” button.

>Oh Goodie!
It’s like a treasure hunt right outside your doorstep: D

A friend of my father’s would usually drop of boxes full of books from time to time, and it is so freaking jolly to go through them.

>yes, i walked in late, just as antjie and leon were doing that fab binne-buite dance.
pity we missed each other.

I was indeed,had a lovely time. were you?

>oooh, real gems there.
my books are still in boxes, waiting to claim spaces.
our new house has a solid bookcase, thrills me to look at it.
were you at the wits poetry event last night?

>WIP, lol…
“Anyway, they need to learn to enjoy books like an adult. Which means: A) only reading books because they think they’re supposed to; and B) exclusively reading books that are much too brainy for them just because they’ve got a nice front cover, then having to spend the duration constantly referring to the little synopsis on the back just to double check what’s going on.

>Read the first post – it made me think of u. Haha http://tinythingsihate.blogspot.com/

>waseem, 🙂 aye, aye, the wiseman has spoken, this lady doth indeed protest too much.

You’re right, and a part of me says, I like doing this so bugger off the rest of the world, but that’s just an alrmist stance to take for me. To moderation!

safiyyah, for you I’ll babysit anytime (even real babies) :p

killa, I think you could use a French dictionary in cote d’ivoire… copied manuals for downloaded games… very apt.
lol at that version of mr.president’s name.

tazeen, I read lord of the flies a while ago but never bought my own copy. Intent on a re-read. And you’re the second person to recommend catcher. going to get a copy today!

I have a bookshelf.. It has all the copied game guides of all the games i donwloaded..

And our president is malay.. Khaleema Motala

>ur bookshelf looks eeerily like mine 🙂
congrads on the new babies, i know who to send my books to now!

>Methinks the lady doth protest too much 😛

Why should you sacrifice your passion though. I feel same way about your love for quoting, even if you feel its an addiction as long as its not harmful,, why should you stop or lessen it.

>Are they really too many? They look ok here, innit? I can still buy more without giving them up can’t I?