Gossip, chatter, nag, rabbit, yak and natter- These are terms used to refer to women’s conversations, implying that women’s talk is superfluous and rather pointless. Women’s talk is often described in terms seldom used about men’s talk. Men, it would seem, attain significance in brevity. Research has shown that men, on the whole, talk far more than women. The stereotype, however, continues to thrive.

Cell C have recently developed a niche product called ‘Winc‘, ‘women incorporated’. A mobile phone package designed specifically for women, ’empowered by Cell C’. I’m not sure what the numbers are like but hot on the heels of the First for Women insurance products women seem to be a lucrative market. I like the First for Women advertisements, they are quirky without being patronising. Cell C however left me feeling disenfranchised. Truth is, I do not appreciate any empowerment from a cell minion. Women can empower themselves, acknowledge that and then I’ll think about parting with my cash. 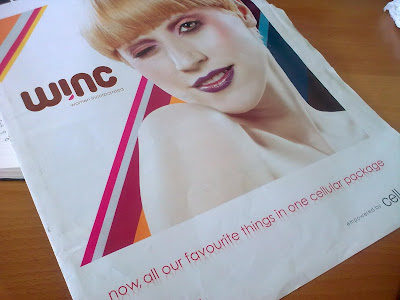 Cell C’s pricey print campaign, sported a bare-shouldered blonde in an uncomfortable looking pose attempting a wink. Beneath the yellow tressed one, ‘Now all our favourite things in one cellular package’. The use of the word our instead of your is clever copywriting. It is an attempt at the creation of a feeling of empathy and collaboration between Cell C and the target audience. Especially clever when one considers that women purportedly desire from their relationships, collaboration, intimacy, support and approval while men, conversely, allegedly place a greater premium on status and independence and are less concerned about inequality in their relationships.

But how exactly does a package for women differ from the usual stock?

Frankly my dears, I’d rather slit my wrists.

From Sarkozy’s ruminations about enforcing a ban on the burqa in France, to Al Azhar’s proposed ban on the Niqab in Egypt, right down to Cezanne Visser’s double D’s, men in superior positions in patriarchal societies continue to dictate how women and womanhood is manifested in public spaces.

In the words of Marianne Thamm writing in the Sunday Times Lifestyle some weeks back,

‘When little girls begin to lose interest in the world around them and show signs of becoming preoccupied by what they see in the mirror, it is time to act. Get Visser in to do some motivational speaking. With her new outfit courtesy of the Department of Correctional Services and her former DD implants in a display case, she will serve as a fantastic deterrent to young women tempted to shed those unwanted brains in order to win the approval of men.’

13 replies on “Chained to the stove and jabbering to my clique- I’m no more liberated than my great grandmother was.”

>Thank you all for reading and engaging.

We must realise that everything we consume in the media is driven by an ideology, whether it is implicitly espoused or not. It is critically important that we hang a question mark against the ideologies of media products. I refuse to be a passively acquiescing sheep dying my wool a deep shade of pink , chewing idly on some stomped on grass while waiting for a bimbo on a plus sized billboard to point the way.
This advertisement is just an example of asymmetrical representations of women in the media.

I understand the business sense behind this product, women between the ages of 25-40 are a huge market in South Africa, as Never Blink points out it is a ploy to get us to send some of our cash their way. What I don’t appreciate is the content of this product and the warped ideologies it is founded on. Exactly like the supposition that only little girls would be playing with Barbie dolls, Shak.
Waseem and Shak, there certainly are circumstances where women talk more than men but on the whole, men have been found to talk much more than women. I don’t have any findings particularly relating to telephones but in my experience when a woman really has a lot to say on the phone, there usually is a man involved. 😛

>I agree with anon's approach completely. If I were him/her I would also be embarrassed to lend my name to a comment like that.

>They could've used a hotter chick on the campaign ads..

>nice read.
anonymous comments are from idiots only..

>I wish anons would stop being condescending and telling us what to care about. This is critiquing social norms and if thats not higher order metaprocessing then this anon has no insecurity complex.

>Is this even something to complain about. i dont mean to be a party-pooper but we must grow up. If such small things like thriving stereotypes, women incorporated, cell c and bla bla bla can make women feel unappreciated, patronised and discriminated against, then isnt the problem loud and clear. i love u dearly but you're so much bigger than this. all of it.

>ur such a social psychologist 🙂
enjoyed this
got miffed earlier at an article in the IMA where they discuss the concept of an Islamic hospital and how its not just about THE NURSES being in hijab. wth.

>I don't like the idea of first for women – its discriminatory and they have those ugly pink cars 😛
In any case, the advert for winc is rather patronising.
From my experience, guys often have heftier phone bills, even if girls spend more time on the phone.
Clearly I don't know many average girls, cos I don't know girls in my generation who spend time gossiping and ranting on the phone. They may talk more but there is generally a reason for the conversation 😛

>I don't think women talk more than men..
my dad's cellphone bill is by far the largest in our house 😛

I don't think cell c thinks women talk more than men either. It's just a ploy to get women to part with their money.

>>The reason I say this is when you phone a girl there is more chance for small talk, like how are you etc.

Yes but more women also gossip, rant and rave more than average, but interestingly only while on the phone. I suspect this has more to do with trying to feel connected while being chained to the kitchen sink than being a fundamentally female attribute.

>To be fair women do talk on the phone more. Of course that's just anecdotal… but a tailored service will never satisfy the whole of the demographic being targeted.

Generally you're right – I wouldn't expect a phone service just for black people. But I'm not sure this particular service is being as derogatory as you're making out. Particular and presumptive, sure, but then so is a Barbie doll advert by only showing little girls playing in it.

>At the risk of earning your ire, I would have to say women do speak more than men, and a package suited to them would be a good idea. I do agree however that this Winc package seems patronising.

The reason I say this is when you phone a girl there is more chance for small talk, like how are you etc. while guys just get to the point and calls are generally shorter.