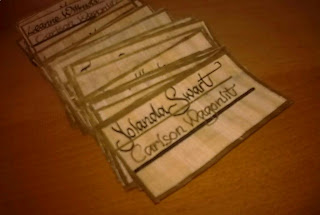 ‘Most editors are failed writers. But, then again, so are most writers.’ T S Eliot

I’ve spent the past few nights, burning the midnight oil, etching my undistinguished, ordinary scrawls onto papyrus, hallowed by history and steeped in significance. I remember reading some sort of writer’s manual a while ago, not so much a self-help bible as much as a writer’s advice to wannabes, where that author cautioned that in order to call yourself a writer, you actually have to have written something, that’s all it takes, write something. To the uninhibited it’s obvious, but to those who constantly seek reinvention in self and art it’s not always that simple. And as I copied down grossly misspelled names into my own script, trying my damndest to keep the lipstick on the less refined form, I was writing in the very basic sense of the word.


And it is to papyrus that we can trace our first dabbling in orthography, so that from hieroglyphics we developed sufficiently enough for one to go back to papyrus and use the Latin script to write names from Greek, Arabic and isiZulu. And in there somewhere, I’ve seen a sign, like a light on a mountain for the forlorn traveller in darkest night, that just as writing as an act of language, developed from hieroglyphics on papyrus in Ancient Egypt, to being coupled with reading to being a statistic of the efficacy of governance, I may develop enough to be comfortable with my own writing.


I’ve been unwavering in my refusal of the term writer as a professional title, I haven’t written enough to justify the title as per that holy grail, and immediately after my undergrad I was uneasy with writing for money, I remember writing in my journal (ironically enough) that it was a kind of prostitution I was undertaking. And now I have a magazine to run, to the few people in the world who didn’t heretofore hear it from me, consider it a trumpet-blaring, scroll unfolding kind of announcement. I have this magazine, this title of editor and the work of a writer. And it’s a whole lot like writing on papyrus

4 replies on “>Writing on Papyrus”

Am selling the mag at the bakery. Excellent content. Have some suggestions tho. Let me know if you’re interested in hearing.

>We always underestimate what we’re capable of, until we prove it to ourselves. We are our biggest dis-believers 😀
I’m sure you’re great as an Editor and Writer 🙂

ur handwriting is so kay

we’re here for u…

>hmm.. Iv never actually written on papyrus… but check the link i gave u… i think its coolness 😛

i think it links better at me twitter page