>Parasputin made up the rules:

a) choose a topic

b) set a timer for 5 minutes

c) switch off your monitor to reduce the temptation to edit

a) I chose a topic by consulting The Writer’s Block, a little book of ideas interspersed with bits of literary nonsense designed to ‘jumpstart the imagination’. I eventually settled on: 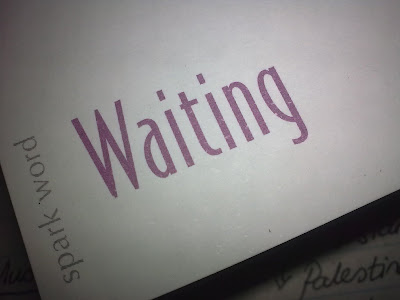 The order in the pharmacy irritated me; neatly metred rows of cosmetics, aspirin, Dutch medicine, bandages… Everything was neatly stacked, nothing out of place. And the smell, a mix of people, medicine and cheap perfume; I could feel my insides rebelling against it. I take a step forward, a sigh weighing heavily in my chest. Winter evenings at the pharmacy; the queue stretches interminably long. The four pharmacists at their booths, like ticket vendors at the cinema, eye the clock with a weary eye. Seven o clock seems far away. A young child walks away on uncertain legs, sucking merrily at a tube of Gaviscon. His mother is unperturbed chatting to another woman, ‘They say no swine flu, elko kone hamjaaveh? My sister’s three kids go to school there. Aasia, the smallest one, she’s in grade five now, so fast they grow up neh…. Ja, she said only eight children in her class today…’ Her voice trailed off as she continued. The other woman, clucks her tongue and feigns the appropriately disapproving expression. I could tell she was not really listening. Her eyes seemed far away. She was well dressed, her court shoes peeking from beneath tailored pants, her blazer unruffled at the tail end of the day. Standing beside her in my ratty jeans and mismatched scarf I felt gauche. I looked at her again from the corner of my eye, admiring her poise and patience. She waves the little stub of white paper in her hand absently.

c) The urge to edit is overpowering but I enjoyed the exercise and have posted my effort untouched. Dignity is overrated anyway.

d) I tag Saaleha, MJ, Aasia, Waseem, Nooj and anyone else up for it.

>*sigh of contentment*
you see…the blogger can only choose the template if the tempate chooses the blogger. This one has my blessing 🙂

>i have "unperturbed.. poise and patience" stuck in my head… playing over and over and over… hmm 🙂 nice going…

>really like it. I think I'll do this again, a good way of clearing cobwebs.-

>done:)
i wish i had your coherence.

>I think that this could develop into an actual story! 🙂

>this was difficult. and not like waving a wand 😛 but the start of something more, perhaps? it made me feel rusty. *oil oil oil*

>Will get on to this once the smell of glue clears from my nostrils:)