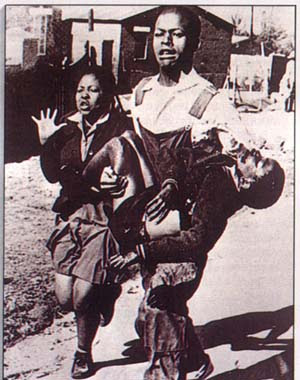 Language, the code behind which we rally to forge out an identity. Language, the code, against which we rally,its derision of that identity. No more so than in the multi-cultural, multilingual hodgepodge that South Africa is language a more a sensitive issue. June 16th, a national holiday in South Africa, Youth Day. We commemorate the heroism of the Soweto youth in 1976, who protested against the compulsion of an Afrikaans-medium curriculum. To a generation not born at the time, not quite fully understanding the impact of what has become an Apocalypse of history, we are haunted by the spectre of Hecter Peterson and indeed, others like him.

I found myself in the curious position of having to tutor Afrikaans today, Youth day, to the daughter of Paskistani immigrants. The irony has afforded a somewhat less affable understanding of the present. June 16, 2008, South Africa is now the unwitting home of an ever-growing immigrant population, a population who we have denied the very freedoms Hecter Peterson died for.

Appeals to the past are among the commonest of strategies in interpretations of the present. What animates such appeals is not only disagreement about what happened in the past and whether the past really is past, over and concluded, or whether it continues, albeit in different forms, perhaps. This problem animates all sorts of discussions-about influence, about blame and judgement, about present actualities and future priorities.

We fail to realise that history is not neat. It is not a neat procession of events tucked away in a textbook. We are the products of history. This, the present circumstances, sullied and imperfect, it may well be, is the product of our history. We may look back to lay the blame for the imperfection on the colonialists and Aphartheid, or we may look back to learn, and take a step forward.
As I explained to my incredulous student, who has the name Benazir to live up to by the way, I am quite taken by the following poem. It may well be in Afrikaans, a language that will for a long time be tainted for being the tongue of Apartheid, but Afrikaans itself is uniquely African. While others continue to look at Africa as the other, the Dark Continent that affords no hope to its peoples and still others have rushed to point South Africa as no less mismanaged as any other state in Africa in the aftermath of the xenophobic riots. But surely the very presence of these immigrants indicate that South Africa is something of a beacon of hope in Africa. Indeed we have not acquited ourselves well these past weeks but as this poem describes a little house by the sea, being ravaged by the darkness of night, the unrelenting anger of the ocean against the rocks it is built upon and the merciless wind that is like a lost soul that finds no rest, I see South Africa, there, a little house by the sea. Battered and bruised, indeed, but deep inside, a fire roars, warming the heart, and a little candle (no thanks to Eskom :p) gives its light.

One reply on “South Africa–My huisie by die see”

This has always been one of my favourite Afrikaans poems about finding shelter, refuge in one’s beliefs or principles. Thanks for giving a new perspective on it!