Don, my new Ugandan friend (if I could take the liberty to call him that), asks whether the xenophobic attacks in South Africa are perhaps an “expression of a bigger malaise that no one seems to capture”. 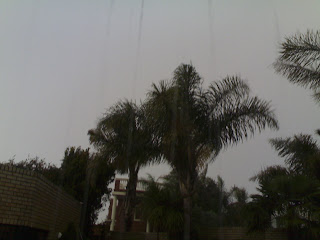 I’ll quote my reply to him, from his post on The Other View:

Regarding the xenophobic crisis: Firstly, it should not be seen as a sudden uprising but rather as a gradual amalgamation of other issues facing the country, poverty, crime and unemployment. I’ll share with you comments from a
columnist of the local Times daily:

…As South Africans, we have an attitude of entitlement. We think that the world owes us something…. directly or indirectly, (we) think apartheid is something to hold on to so that we can be viewed as victims and everything should be smooth sailing for us.Here we are 14 years since the beginning of democracy in South Africa and we are still holding onto 1976. (Xulu N, The Times, May 26 2008)

It sounds harsh, but I can back much of what she is saying through my own
experiences.

In the same edition of the paper, a report on Jacob Zuma’s visit to one the xenophobic hotspots (as it’s now called):

“… the atmosphere became tense when someone interrupted Zuma’s opening remarks to ask why the meeting was being held in a predominantly Indian, upmarket suburb….

“Zuma and others who went into exile stayed in the camps in (Zimbabwe and Mozambique), they were not all over the place like here,” a resident said.

The man went on to tell Zuma that the reason Mozambicans were targeted was ‘because bosses put them in charge over us at work. This is because every time the white man says ‘Do this,’ the Shangaan (Mozambican) says. ‘Yes, baas (boss)’.” (Msomi S, The Times, May 26 2008)

During a recent foray into honors media studies, I learned to interpret violence as a language, or as Don succinctly put it, ‘an expression of a bigger malaise’. While the violence has now died down and the plethora of condemnation is replaced with fresher news, it remains for the underpinning philosophies to be trashed out.

Like the unseasonal winter rain, xenophobic violence erupted pelting down mercilessly and then retreating. As the sun shines again on a frosty morning, where to from here?

Much like xenophobia, is islamophobia. As Africans dominated colonial literature as the other, so too, does the Muslim weigh on the Western subconscious as the other, the unruly, heathen, barbarian who needs to be brought to the book.

Writing for the Charleston City Paper, Jack hunter believes that, “When it comes to Islam, good fences make good neighbors”. I’m not sure how Robert Frost would feel about his poetry making headlines thus, but I quote here a few snippets from the article:

Liberals who pretend that Islam is entirely harmless do so at their own peril. One need not cite barbaric quotes and commands from the Koran to recognize that while every Muslim is not a terrorist, a significant portion of
them are, and that portion is a force to be reckoned with.

Decades of mass immigration into Europe have proven multicultural assumptions about Muslim assimilation dead wrong, and in places like the U.K., France, and elsewhere, majorities now believe that Islam is simply incompatible with Western society. To say this is offensive to some, particularly when we all have Islamic friends or neighbors who are decent, law-abiding citizens. But the same could be said of relatives of mine, who as Southern Baptists are the salt of the earth.
Yet, does anyone believe that if two million Southern Baptists (the estimated number of Muslims in the U.K.) planted roots in the heart of liberal San Francisco, that their presence would not create serious religious, political, and cultural tension?

Whereas European nations foolishly allowed Islam to enter their own backyards, the U.S. has not only been having a backyard barbecue in the Middle East for decades, but in 2003, President Bush decided to bring out the fireworks. The invasion of Iraq alone exploded the ranks of Al-Qaida by the
millions and was the best possible gift the U.S. could have given radical Islam.

The Left’s assumption that American imperialism causes Islamic terror is essentially correct. John McCain’s statement that he doesn’t mind keeping troops in Iraq for 100 years won’t trouble generations of potential terrorists half as
much as the fact that he might actually do it.

The Right’s assumption that Islam poses a danger is also essentially correct. But this danger is only born of geography, not an inevitable clash of philosophies. Like a flame to gasoline,
the Middle East and the West only become combustible when they meet.

What do you think?

The complete column can be viewed at: http://www.charlestoncitypaper.com/gyrobase/Content?oid=oid%3A46061