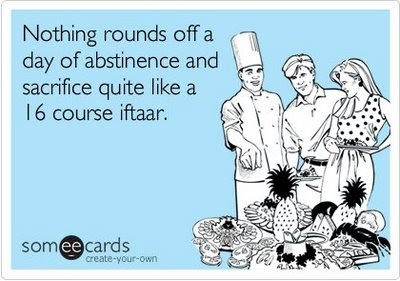 Societies need to produce materially to continue- they need food, shelter, warmth, goods to exchange with other societies; a transport and information structure to carry those processes. Also they have to produce ideologically….They need knowledges to keep material production going- diverse technical skills and wisdoms in agriculture, industry, science, medicine, economics, law, geography, languages, politics, and so on. And they need understandings, intuitive and explicit, of a system of social relationships within the whole process can take place more or less evenly. Ideology produces, makes plausible, concepts and systems to explain who we are, who others are, how the world works.

Among the people I know, and those that they know, all schools of thought informing kitchen related activity, are industriously encouraging the harvest of that Ramadan obligation, the savoury. Traditionally, assuming the form of the humble samoosa and pie, today’s savoury, all clicked out for the appeal of the gourmet-fare quaffing, has generated a new variety of food.

Singleguy’s recent post has got me thinking. Particularly this part, ‘I’ve never met anyone who doesn’t like children before, let alone a woman?’ No, I’m not going on a feminist rant (again), rambling on how love for children is not intuitive to women, that bit is obvious. I’m wondering rather about fulfilment. Where do we find fulfilment? Shouldn’t all women find fulfilment in children? Shouldn’t the possibility of a child of one’s own, be driving us? I’ll be honest to admit that I derive some sense of fulfilment from writing. It releases me into an autre universe when a present set of sullied circumstances don’t give me much reason to stay within. In taking from others and giving of my own, I feel fulfilled. It’s not so much the release from within me as much as touching others that drives me here. So too, my studies fulfil me, or so the more noble me would claim, but it is a selfish kind of fulfilment. I wonder if the present set of circumstances would turn out to be more perfect would I still find fulfilment in doing this? And then there’s this person of my acquaintance, everything to which I aspire, married, a beautiful baby girl, educated to an advanced post-grad level, critically-acclaimed work in her field, yet she spends every second she can claim, chatting on facebook and IM while her home lays in abject squalor. Surely to be seeking out through facebook and IM, the present circumstances can’t be that fulfilling? Is it just the individual? If she’s fulfilled in all that she is why can’t she be prevailed upon to maintain her fulfilment? Or do I have a warped sense of fulfilment? Perhaps fulfilment doesn’t lay in the ever-after. I remember someone telling me of an Egyptian actress, who had said that she had been married to Saudi men, Egyptian men and Lebanese men (if I remember correctly she was quite a rival to Elizabeth Taylor) but said she was never truly fulfilled until she tasted the feeling of prostrating to a higher deity. Perhaps that’s it. Because it would be unfair if the unmarried an un-motherly among us, were to never taste fulfilment. Beyond the material world we crave, beyond the ideologies we create, beyond the socialisation patterns spawned to maintain the material, fulfilment is spiritual.

I remember years ago, watching an episode of Ready, Steady, Cook when a contestant confessed he didn’t like puddings, he much preferred savouries. Ainsley Harriot, remarked on his use of the word ‘savouries’ , calling it old-fashioned. In the UK, perhaps, but in this part of the world, a weighty section of the South African Indian Delights (Indian cooking for dummies) is devoted to savouries. Who am I to argue with Zuleikha Mayet? I’d like however, to propose a slight alteration to the definition, seeing as we do use the word more than the British whose lexicographers have labelled it a small dish, served before a meal.

Savoury, n , South African Indian English, A small dish, pricked, prodded and packed to contain a semblance of a large meal, consumed in large, movement-impeding quantities by the ravenous and harvested with aplomb in the weeks preceding Ramadan.

18 replies on “A savoury idea”

>OH, you are right. Traditionally it is meant to be lightly flavoured. Another way that we’ve erm… adapted… it to the local palate. lol if it isn’t spiced with red or green stuff it isn’t food.

>arent savouries supposed to be light in flavour too? the flavour should not taint the main course. what do i know. i only eat the food. nothing can be too bland for our beloved indian aunties.

>ah finally reinforcement… glad someone agrees with me ren!

tazeen, the irony of it all hey…hmmm…

>I SO HEAR YOU.
thats what we do here. We fast and then we gorge and then we are too stuffed to move.

>Young lady, such language does not befit a lady of stature, station and rank. A strong woman would rather channel all that energy into endeavours more fulfilling :p

>The picture you added is hilarious 😀
Will do 🙂 all those days practicing saying “biyatch” has gone to waste *tsk,tsk*

I’m tagging along global! Save me a seat 😀

>lol @ waseem, altho i have to agree with you on the corn n cheese there, the mere thought makes the savoury harvest a lot more bearable:p

crimson, i think, in food, there is a rare kind of fulfilment, a basic one, beyond the sheer necessity for it, there is the knowledge that it can not disappoint, it always measures up… can you tell i havnt had breakfast yet?

global, tafshaana bi jeddah?! ysee the grass is always greener on the other side. i have such memories of ramadan in saudi… the traffic, the malls that don’t allow an ant space, taraweh with the whiff of the ocean in the air, almadina… *sigh*… yalla when do we swop…? saudia flies to johannesburg on mondays and thursdays… :p

>Ramadan in Saudi can be boring sometimes. I’m ready to swop places, Khadija!

>you’re making me hungry…
and its not fulfilling 😛

>I love samoosas :), I love samooosas in Ramadaan. Samoosas should be sunnah for iftar :D. Esp. sweetcorn and cheese, yum 🙂

>8bitsofcoffee, i miss ramadan in saudia, so we could swop places if you really wana :p

“Savoury, n , South African Indian English, A small dish, pricked, prodded and packed to contain a semblance of a large meal . Harvested with glee in the weeks preceding Ramadan.”
Oh my, yumm.

Shall I pack up to Johannesburg?

>:) your opinion is highly valued, and already acted upon…

i think last year statistics showed halal butcheries in two months leading up to ramadan sold something like 500 tons of chicken fillet in jhb alone! it’s ridiculous, do we really eat all of that?

>please bring back a lighter colour, it much more suited your engaging banter…i personally preferred the white

yes fulfillment is varied. if i love kids, why don’t i run an orphanage? personally i think the amount of savouries we as the collective indian SA muslim whole quaff is ridiculous. sigh. i do like springrolls and steak and mushroom pies.